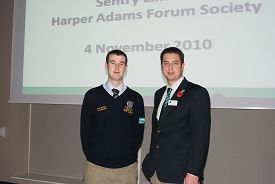 Sentry is a long established private company and market leader, specialising in land management on behalf of a wide range of primarily rural and institutional clients.

Mr Mayes opened the Forum by describing his own career journey through the group. He began as a trainee manager, progressing to assistant manager, and then onto his current role as business manager of 1100 hectares.

He highlighted the industry's possible shortfall - that of new entrants. It has been predicted that more than 110,000 graduates are needed over the next ten years.

In addition to this, eight per cent of the work force are currently over 65, and when comparing this to the national average, this is an increase of six per cent.

Mr Mayes continued the Forum by explaining to the students of Harper Adams the benefits of working for Sentry, including the training programme for trainee managers within the firm.

This is a two year programme with each year having three modules and these are undertaken over set days in one area of the group, e.g. Norfolk, Surrey or Leicester. The programme is in collaboration with other significant groups such as Agrovista, Claas and John Deere.

To conclude, the question and answer session brought forward a pressing query – How many graduates do they actually employ? The answer being ‘‘four every 12 months’’.

There is currently only 25-30 farm managers and so for a growing but relatively small business this can be seen as a huge investment.

Next week’s forum is Miss Rebecca Geraghty from HGCA.