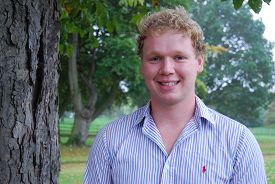 Second year student, Matthew Stubbings, is celebrating his success after being the first person from Harper Adams to be awarded a scholarship with leading frozen food manufacturer, McCain.

The 19-year-old from Malton, North Yorkshire, went through several rounds of interviews before scooping the award, which will pay his tuition fees and provide work experience with the company during holidays.

Matt, who is studying a BSc (Hons) Agri-Food Marketing with Business Studies degree at the University College in Shropshire, was asked a wide-range of questions by the panel, such as what challenges agriculture faces in the next five years, and about his role at Harper Adams.

He said: “I heard about the scholarship while I was doing some work experience with McCain in Scarborough last Easter break.

“I fell in love with the company and their ethos. Everyone was really welcoming, enthusiastic and open to new ideas. There seems to be a lot of opportunities available.

“During the interview, they asked the standard questions such as why I was applying, but then more challenging ones such as what I thought of certain agriculture schemes available at the moment.”

Matt has been invited to spend time working at McCain during holiday periods when he is not busy studying and working as the Vice President on the Student’s Union.

He added: “The money is obviously a big deal, but really, it’s about having the opportunity to become part of a company such as McCain.

“So far, during my work experience, I’ve spent time in different departments -  out in the field with the agronomists, in offices with the marketing team and then in product development. My course at Harper is varied too and has prepared me for this sort of experience.

“I can’t really say which area has been my favourite so far, but I’d really like to combine agriculture with business which is what McCain can offer.”

Matt is a member of Amotherby Young Farmers and spends time racing motorbikes. He was elected as Vice President on the Student’s Union in February, supporting President Peter Dodd from Stockton on Tees.