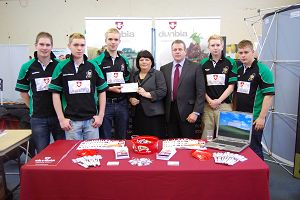 Harper Ireland is the student body for all prospective and existing students from Ireland at the University College in Shropshire, and is dependent on fund-raising and sponsorship.

Dunbia, which has ten sites throughout the UK and Ireland, have contributed £1200 of funding which will go towards the club’s new rugby shirts.

Meeting with students at the Careers and Placement Fair yesterday, Ashley Stewart, HR Manager at Dunbia, said: “What we can offer Harper students is placements that are useful and meaningful, as well as graduate employment. We have a strong interest in using placement students to fill the roles that we have available.

“So, we’re looking for students that have an agricultural background, studying either an agriculture or food course. But, it’s really about the people - the skills and the qualities that they have.”

19-year-old Stephen McKean of Strabane, is the current Chairman of Harper Ireland and accepted the generous donation from Dunbia.

He said: “The best thing about Harper Ireland is getting to know people from your area and from around Ireland.

“Studying in Shropshire is a big change, but you soon settle in once you get to know other people and everyone is in the same boat, leaving home.”