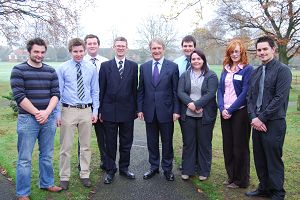 Mr Paterson, a Shropshire MP, has a particular interest in the University College and during his visit spoke to Principal, Dr David Llewellyn, about the coalition Government’s plans for the future financing of higher education and the need for UK land-based institutions to successfully compete in the international market.

Harper Adams, based in Newport, Shropshire, recruits students both nationally and internationally and has long-standing, successful relationships with overseas institutions including Beijing, where its programmes recruit more than 80 students each year.

Mr Paterson was given a tour of new developments at the University College including the new 400 cow dairy unit, the West Midlands Regional Food Academy, the Postgraduate and Professional Development Centre and the new Student Centre – to be formally opened early next year.

The tour also included the recently opened Silcock halls of residence, the new pig finishing unit under construction and the anaerobic digestion system which will come into operation in mid-2011.

Commenting on the visit, Dr Llewellyn, said: “It was good of the Secretary of State to take the time from his busy schedule to visit us.

“We had a wide ranging discussion that covered not only local matters, but also the proposed changes in higher education funding and the place of Harper Adams in the UK higher education system.

“We were delighted to have been able to show Mr Paterson some of our new developments and to talk to him about a variety of rural issues in which we have a keen interest.”

To conclude the tour, Mr Paterson met with a small group of students from Northern Ireland, who spoke about their backgrounds in farming, career aspirations and reasons for studying at Harper Adams.  The University College has a strong contingent of students from across Ireland, and is keen to develop these links.

Mr Paterson, said: “I was delighted to visit Harper Adams again and see the great progress the University continues to make and the first -rate educational experience it provides.

“Many of my constituents from North Shropshire attend, but I was also particularly pleased to meet a group of students from Northern Ireland as well.”