CLAAS scholar for 2010 is announced 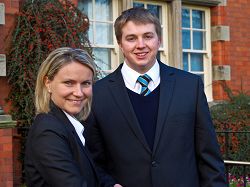 The CLAAS Group has announced that Harper Adams student Miles Metcalfe is the winner of the 2010 Scholarship for Agricultural Engineering.

Miles,20, from Northallerton in North Yorkshire, is currently studying MEng (Hons) Agricultural Engineering at the University College based in Shropshire.

As this year’s winner of the coveted  CLAAS Scholarship, Miles will have his fees for the second and fourth years of his studies covered, and in year three he will complete a one-year sandwich placement with CLAAS, both in England and Germany.

Students Stephen McKean and Tom Fraser narrowly missed out on the scholarship, but impressed the panel of judges so much that they have already been invited to spend their placement years with CLAAS.

Miles said: “I am really pleased and very happy to join CLAAS. I’m very much looking forward to the placement. I’m glad that some of it is in the UK and some of it is overseas as I will be able to see how engineering is done elsewhere.

“The financial aspect of the scholarship will really help with my studies here at Harper Adams.

“I also hope to do well in my degree and if the placement goes well hopefully stay on with CLAAS. In my career I really want to focus on prototyping and field testing.”

In selecting Miles as its latest Scholar, CLAAS took into consideration not only his academic background, but also his character, skills and enthusiasm for agricultural engineering.

Beate Kral, from Human Resources Management Development at CLAAS KGaA mbH in Germany, said Miles convinced the judging panel that he was the right person for the scholarship.

She said: “We chose Miles because of his personality, his motivation for engineering and for CLAAS and his project work showed a good grasp of engineering. We are looking forward to having him during his placement year.”

Mr Tyrrell added: “We want to offer our congratulations to all three candidates. We have asked both Stephen and Tom to join us for their placement next year and we were very impressed with both of them.

“Miles has some really fantastic opportunities ahead of him.”

In seeking to establish a more diverse international community of young engineers, Dr Claas has recognised the need to encourage a wider spread of international engineers, especially in the area of field-testing. But with engineering centres around the World, it is also important that the teams are able to communicate using a universal language such as English. 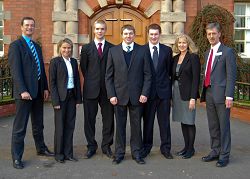