After many conversations with professionals in the industry, they all recommended Harper as they too valued the placement year. 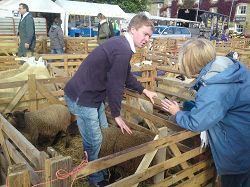 The 20-year-old is currently studying Rural Enterprise and Land Management (REALM) at Harper Adams and is on placement with Savills in Ipswich.

He said: “I visited many universities but chose to study at Harper for several reasons. I liked the variety the REALM course has to offer as well as the idea of a placement year.

“After many conversations with professionals in the industry, they all recommended Harper as they too valued the placement year. I also heard great things about the social life at Harper from friends.”

As well as studying hard at Harper Adams in Newport, Shropshire, Philip has also built up his own enterprise.

He said: “Our family farm is at the foot of Weardale, where we have around 200 acres and farm a mix of suckler cattle, sheep, cereals and poultry.

“After many years of breeding pedigree Shetland sheep, my brother and I decided to independently set up a flock of commercial Shetlands, renting land from family friends.

“At the moment, we sell lamb and mutton boxes to friends, family and the local community but are looking into a delivery service to enable our produce to be sold to a wider customer base. We also hope to improve our product by using traditional abattoirs and to sell mutton under the Mutton Renaissance Scheme.

“We are in the process of setting up an online e-mail system to inform our customers about the produce that we have to sell.”

Philip and his brother hand-clip all fleeces from the sheep and currently sell them to ethical wool company, Izzy Lane, which has a fashion label in London.

They also sell fleece to hand spinners and have arranged a presentation to a Spinners Guild in Lavenham, where they will try to market the fleeces to a premium market.

He added: “As well as the commercial sheep we own, we also have Shetland sheep suitable for showing. This year I exhibited at four shows and managed to win three championships – two with sheep and one with a fleece. In the coming year we hope to compete at five shows including the Royal Highland and The Great Yorkshire.

“But it doesn’t stop at sheep. We also have a free range egg enterprise with around 30 chickens, as well as producing Christmas turkeys, ducks and geese.

“We have built this up from scratch with support from our parents and are very proud of what we have achieved.”

Philip will be returning to Harper Adams in September to begin his final year of study. 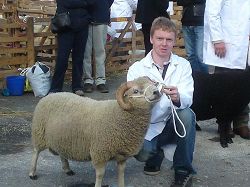