I’m here representing last year’s committee - it’s their achievement that has led to this scholarship. 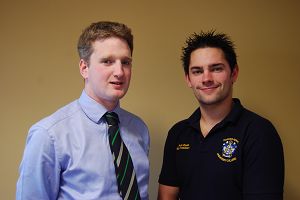 A successful Harper Adams graduate has returned to his place of study to help award a new £1000 scholarship to an outstanding student.

Matthew Stuart graduated from Rural Enterprise and Land Management (REALM) in September and visited the University College this week to interview candidates for the new Summer Ball Scholarship.

This rewards individuals in the fourth year that have contributed significantly to the social life at Harper, while maintaining high standards of academic achievement.

The committee, consisting purely of final year students, is responsible for organising the annual Christmas and Summer Balls. The scholarship is seen as means of involving all students, as most attend the two events, to give something back to their peers.

24-year-old Matthew from Ballinamallard, Co Fermanagh, compiled the judging criteria. He said: “It’s fantastic to return to Harper Adams and play a small part in giving something back to the students. I’m here representing last year’s committee - it’s their achievement that has led to this scholarship.

“I wish every success to the new committee.”

Matthew, who is currently working for Fisher German, was the committee treasurer and it is thanks to money raised through sponsorship and fund-raising last academic year that the current committee can offer the scholarship.

After some deliberation, the recipient of the scholarship was chosen as 22-year-old Tim Sedgewick from Binchester, Bishop Auckland. Tim is studying Business Management and Marketing and is the current Summer Ball committee chairman.

He said: “I feel very privileged to receive the first ever Summer Ball Scholarship. It’s a fine example of students helping other students, and is proof that showing enthusiasm and being involved has financial and fulfilling rewards.

“As the chairman, I will now be working hard to ensure a fantastic end of year ball, as well as creating funds for next year’s recipient of this tremendous scholarship. We have an amazing team this year made up of terrific individuals who all have great futures ahead."

During his visit, Matthew also took the time to speak to his successors, including Tim, and give them advice about organising the main events of the social calendar.

Tim added: “Matthew’s advice has been really useful to us and we can learn from his experiences and the challenges that he faced during his time here.

“His main tip was to budget well and monitor spending, add value to the budget and ensure that we put on a show for the students of Harper Adams.”

Student Union President, Peter Dodd, was also on the judging panel and was extremely impressed with the standard of applicants.

He said: “The calibre of applicants was fantastic and it was a very close decision. If more funds were available we would have split the money and shared it out between two or three of them.

“Tim was chosen because he has contributed a lot to Harper Adams in a relatively short space of time.”

To ensure that the scholarship can continue, the Summer Ball committee are beginning to make provisions to set aside money ready for this time next year. 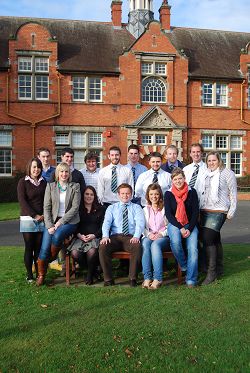