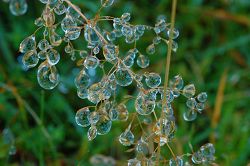 A calendar featuring stunning photographs of Shropshire countryside taken by local people has been produced by Harper Adams University College for 2011.

The University College based in Edgmond, near Newport, recently held its first photography competition and exhibition, asking staff, students and anyone living locally to contribute entries with a ‘countryside and environment’ theme.

The number of entries was far more than organisers expected and the standard was so high that picking a winner was a difficult task.

The winners were announced at a special ceremony held at the West Midlands Regional Food Academy at Harper Adams last month.

A digital exhibition of all the entries was then displayed in the library and open to the public but organisers decided the photographs were of such high quality that a 2011 calendar should be made.

Janine Heath, Video Journalist and Acting Communications Manager organised the competition. She said: “One of our lecturers, Simon Keeble, thought of the idea after being inspired by a local photographer. Everyone thought it was great so we put the call out for entries.

“We are an agricultural and land-based studies institution and all who come and work here have a passion for the environment so we wanted to extend an invitation to anyone living in Shropshire to enter.

“The judges were overwhelmed, not just by the amount of entries, but by the high quality. There were some really lovely photographs of the local countryside and beyond and we thought we would make some of the best into a calendar for all to enjoy in 2011.”

Judges had more than 200 pictures to choose from with more than 60 budding photographers submitting work. The selected four are also set to be displayed in the new Graze Café on campus next year.

One of the winners, Lecturer Ed Dickin, was a favourite with all of the judges for his photograph of dew drops on grass in North Wales.

Local amateur photographer, Maria Justamond, was also chosen in the top four. Her photograph of a Shropshire hare was commended for the skill of capture and use of light and shade. Maria's other entries include a close up of a wasp, a corncrake and a sailor beetle.

Agriculture student James Wilson's photograph of a dog in a field scored a top spot for its imaginative use of texture and general likeability. His other entries were a Shropshire landscape, a woodland scene and a different shot of the winning dog.

Finally, Shropshire photographer Natasha Bridges impressed judges with her photograph of a Land Rover in the snow with sheep. This photograph epitomises the theme and caught the judges' attention immediately. 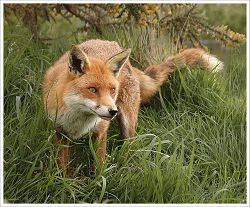 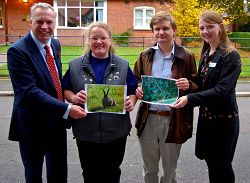