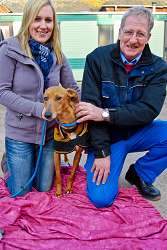 Dogs at a local rescue centre are feeling a bit warmer this winter thanks to the generous donation of a long-serving member of staff at Harper Adams.

Bernard Greatbatch, 66, has worked at the University College near Newport, Shropshire, for 16 years where he is now head porter.

When one of the halls of residence was being re-decorated recently, he sent all 200 pairs of curtains to the laundry to be cleaned.

But domestic services staff decided the curtains were too old and new ones should be ordered.

Instead of throwing them away, Bernard decided to recycle them and give them away to a good home.

He contacted Swan Pit Dogs Home in Gnosall, Stafford and asked staff if they would like to take them as bedding for the dogs.

Katie Hatfield, proprietor of the rescue centre and boarding kennels, said: “We can’t thank Bernard enough for his generous idea and donation.

”Swan Pit does rely on charitable donations to keep running and Harper Adams regularly donates items and food to us. The curtains were a really good idea though and are helping to keep many of our dogs warm and comfortable this winter.”

Bernard, who lives in Newport, said: “I thought that giving the curtains away would save wasting them. We collect tins of food for the dogs home here at Christmas and I thought of them when thinking what we could do with the curtains.

“We try and recycle wherever possible at Harper Adams so this was another way of doing that.”

Bernard met with Katie and a stray Lurcher found on January 16 in Brineton, near Blymhill, Shifnal. Swan Pit is hoping to trace the female dogs’ owners or re-home her. To find out more, contact Swan Pit on 01952 82221.

Bernard is now hoping to save some funds to take his granddaughter and family to Lapland.