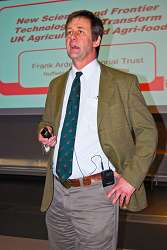 Harper Adams staff and students have been treated to a lunchtime lecture about new technologies in agriculture by a leading expert.

David Gardner, Head of Fruit Operations at Co-op Farms, who has recently completed a Nuffield Scholarship on new technologies in agriculture, was the guest speaker last week.

Mr Gardner has travelled world-wide to investigate recent developments in agricultural production and delivered some of his findings to a full-house at the West Midlands Regional Food Academy Lecture Theatre, at the Shropshire-based campus.

His talk focussed on the use of robotics and other precision-farming techniques and included a number of fascinating videos of the latest robotic equipment in operation.

Dr David Llewellyn, Principal of Harper Adams, welcomed Mr Gardner and said: “David has a long standing connection with the University College in a number of ways.

“It’s really important for us to be thinking about this whole issue of new technologies and scientific advances.”

Mr Gardner said: “I believe that everything is possible and in 100 years‘ time robots will do everything for us – I could be right or wrong.

“When you start saying ‘you will never do that’, you close your mind up and you limit your thinking.”

He took the audience through what robots and machines are capable of doing right now.

He showed images and footage of cutting edge design including asparagus and strawberry pickers and explained how difficult it is for a machine to mimic human touch so as to not damage the crops.

He said: “I think that in 40 to 50 years’ time, agriculture and farms will look nothing like what they look like today and we will see an enormous amount of change that we currently can’t imagine and it’s your generation which will have to manage that.”

Mr Gardner then took questions from the floor on a range of topics such as what did he envisage as being the biggest change in agriculture during the next 10 to 15 years, what he thought of genetically modified food and what would happen to the rural workforce due to all the change. 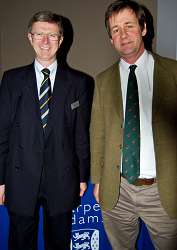