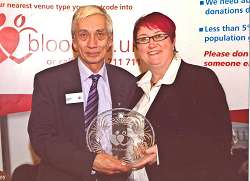 An audio visual technician from Harper Adams has been honoured by the National Blood Service for 30 years of donations.

Geoffrey Gamble, known as ‘Allen’, began giving blood at Cosy Hall in Newport, Shropshire, after being inspired by his wife Kathleen’s contributions, who also works at the University College.

He was presented with the Emerald Award for 75 whole blood donations, which includes a personalised certificate and crystal plate, at the Park House Hotel, Shifnal, last week.

Allen, who has worked at Harper Adams for 11 years and is a Newport resident, said: “It’s fantastic to be recognised and to gain the respect of professionals, but really it’s not about that, it’s about saving lives.

“Less than 5% of people give blood, yet more and more is needed as the population increases and more operations take place.

“I’d recommend anyone to try giving blood, it doesn’t matter which type you are, all blood is needed.

“I’m happy to continue giving, it’s just an hour of my time three times a year, which is nothing really.”

Jane Pearson, Assistant Director of Nursing at NHS Blood and Transplant, presented the award. She said: “It really is an honour and a privilege to be able to present Allen with an award for such selfless dedication.

“It’s thanks to people like Allen that patients in hospitals everywhere are able to receive the lifesaving blood they need.”

Allen is now working towards the Diamond Award which is given in recognition of 100 whole donations and includes a crystal decanter.

Cosy Hall is located at Water Lane in Newport. To find out more about giving blood, or to find your local centre, visit http://www.blood.co.uk