A special event to unveil commemorative boards in recognition of work by some of the country’s leading poultry experts has taken place at Harper Adams.

The special English Oak Boards featuring the gold names of industry specialists who have contributed to more than 20 years of Fellowships in Poultry Research, supported by the University College, were officially unveiled on Friday.

The Temperton Fellowship, founded in 1989, was established to commemorate the contribution of Dr Harold Temperton, Director of the National Institute of Poultry Husbandry at Harper Adams from 1951 to 1974.

Each year, an invited speaker presents a research report to industry experts and other interested parties at the Farmers Club in London, with a current total of 24 Fellows involved.

The boards which list the names of these and future Fellows, were proudly unveiled in the Temperton room (named after Dr Harold Temperton) at the Shropshire-based campus last week

Opening the event, Peel Holroyd, Chairman of the Temperton Fellowship, said that over the years Harper Adams and the poultry industry had worked very closely together.
He said: “One of the challenges of a fellow is that his or her report has to meet the requirements of the academic college.”

He said that unveiling the boards was a thrill and added it would set a precedent for so many aspects of agriculture.

Principal of Harper Adams, Dr David Llewellyn – a future 2020 Fellow, said: “Over the course of the last year, in trying to make sure that our connection to the industry is added to, we have done an awful lot.

“But there remains a lot to do and there are challenges ahead. There are areas of work in which we need to develop our thinking.

“I am delighted we are here to celebrate the unveiling of these boards, the work which we have done to date and our connection with the poultry industry. Thanks to all our sponsors.”

Ron Temperton, son of the late Dr Harold Temperton, said: “I am delighted and proud that my father’s memory is being perpetuated. The fact that the Fellowship is going to continue is wonderful and I am sure he would have been delighted that his work with Harper Adams has been recognised in this way.”

He said: “I think today is a credit to both the Fellowship and the University. It’s a good signal to the industry that we do this type of research to help us move forward into the future.”

He said he was an avid supporter of the Temperton Fellowship and said Harper Adams was the perfect environment to produce industry leaders of the future.

The latest Temperton Research Fellow is Richard Hutchinson, Sales and Marketing Director of Aviagen Turkeys Ltd. He is to present his report on June 6 2011.

The Temperton Fellowship is financed by the accrued annual interest from the Temperton Trust investments which are derived from contributions and donations, as well as proceeds from sales of the book – ‘The History of the National Institute of Poultry Husbandry’ by ME Telford, PH Holroyd and RG Wells, published by Harper Adams University College, September 1986. 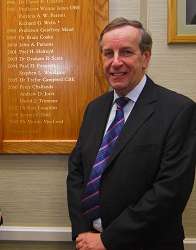 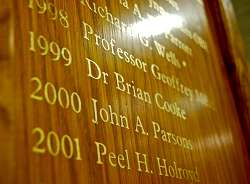