Students give £3k to Everyman 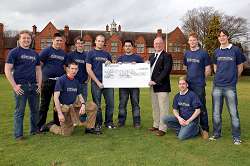 A male cancer charity has received more than £3300 in donations thanks to students and lecturers at Harper Adams University College and their mankinis.

Around 60 people chose to wear the unconventional undergarments last November to raise money for Everyman – a charity dedicated to prostate and testicular cancer research.

The mankinis were worn around campus for a day either alone, or over clothing, and the cash was raised from the sale of the outfits and from donations.

Everyman is a charity close to Harper Senior Lecturer, Simon Marsh’s heart. He said: “Unfortunately around a year ago, my 19-year-old son, William, was diagnosed with testicular cancer.

“He has since made a good recovery and has come through 'all clear' in his recent tests which is brilliant news, but will of course be monitored for the next 5 years.

“Last October I mentioned this to Harper Adams Student Union President, Peter Dodd, and the ‘Mankini Appreciation Day’ was organised.

“I even wore one over my clothes! The funds raised have been tremendous and shows the extra mile that our students will go to help out a worthy cause.”