Student in final three for trip of a lifetime 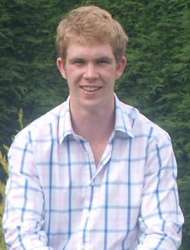 Final year Harper Adams student, Daniel Bradley, has made the final round of a national competition to win a once-in-a-lifetime trip to a country of his choice.

The 21-year-old from Knighton-on-Teme, Tenbury Wells, is hoping to be crowned the winner of the Farmers Guardian Agriculture Student of the Year competition 2011.

He is up against two other students - Harriet Clark of Bishop Burton College and Sam Barnes of Kingston Maurward College.

After making the final three thanks to the public vote, Dan is to give a ten minute presentation on February 28 to judges from the Farmers Guardian and the competition’s sponsor, AgriVenture. This will be followed by a question and answer session.

Dan, who would like to develop his sheep knowledge and agricultural understanding by working in New Zealand, said: “This opportunity will allow me to address issues, adapt ideas and produce solutions to problems at my own level and also stand me in good stead to share them with the agricultural industry, especially with regards to sheep. I want to learn the practical skills and the theory based behind it.”

Dan, who studies Engineering Design and Development at the University College, entered the NSA’s National Young Shepherd of the Year competition in 2008 and was named winner in the under 21 category, third overall. He is a Harper Adams scholar and a capable fabrication engineer, having built his own specialist match plough.

He has also helped to raise £12,000 for Diabetes UK and Acorns Children’s Hospice by driving two quad bikes from John O’Groats to Land’s End and then to Torquay for the national Young Farmers Club AGM.

He added: “I am obviously quite chuffed that I have made it this far, but the hardest and most decisive part is yet to come. I will be proud of any result as it reflects my commitment and passion to British farming.

“Whilst at Harper Adams, I have gained the valuable theory base in my subject, and this coupled with the fact that I have attended Harper, which is a well-respected higher education institute in agriculture and engineering, will stand me in a very favourable position when applying for jobs.”

The student crowned Agriculture Student of the Year will choose from a seven, nine or 11-month paid work placement in Australia, New Zealand, Canada or the USA. They will have the opportunity to gain practical, hands-on experience, while meeting fellow professionals and new people and enjoying other cultures.

This exclusive work placement, worth £3,000, is being provided by AgriVenture, which has helped more than 30,000 young people across the UK to experience a trip of a lifetime, while working and living abroad.

Harper Adams Agriculture student, Rob Cotton, was also successful in this competition, making it to the final five.