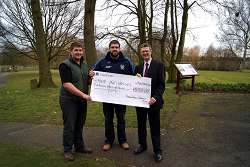 The Harper Adams Shooting Club and Field Sports Society are arranging a charity clay pigeon shoot for Help for Heroes with the aim of doubling the amount raised last year.

The big event will take place on Saturday, March 12 at Doveridge Clay Sports Club, in Uttoxeter, Derbyshire with cash prizes of £100, £75 and £25.

The Society hopes to raise more than £1,000 for the charity which supports men and women returning from Afghanistan and their families.

Paul Brooks, who is organising the event alongside Steven Mears, said: “This event isn’t really about either club or society, any individual or even Harper Adams, but it is about all those that are serving overseas and often giving their lives on our behalf.

“Having said that, we had a great time organising and running the event last year and we hope that we can have more fun whilst raising loads of money for such a worthy cause. Last year we raised £550 and we would like to beat that.

“Lots of staff and students at the University College have volunteered to help with the event and we look forward to seeing as many people there on the day to support this worthy cause.”

The event will run from 9.30am until 2.30pm when the last entries will be taken.

It costs £15 per round of 50 clays and £12 for re-entry, with all proceeds going to Help for Heroes. Cartridges will be available to buy from Doveridge.

The HAUC SU Field Sports Society Charity Shield Cup is also up for grabs by any four person team.