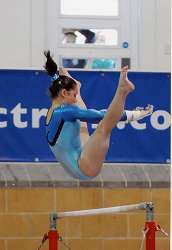 Emily, from Dorstone, Hereford, travelled to Rushmoore Gymnastics Academy in Aldershot to compete in the British Universities and Colleges Sport (BUCS) 2011 championships.

Despite currently recovering from an injury, she still represented Harper Adams, facing talented young gymnasts from institutions such as UWIC and Leeds Metropolitan on the beam, bars, floor and vault apparatus.

The 18-year-old, who trains four times a week at Park Wrekin Gymnastics Club with coach Christine Still, said: “I’ve been a gymnast since the age of five and have been competing on a national level for the past seven years.

“More recently I joined the England Squad and have been competing in countries such as Russia and Germany.”

In 2009, Emily was crowned the English Senior Champion and is hoping to trial for the World Student Games in China later this year.

She added: “I fit my training around my lectures at Harper Adams and it works quite well.

“I chose to study here because the course appealed to me and it also meant that I could still train at the same gym club with my coach.

“I’m really enjoying being at Harper, and hope to combine the work I’m doing on nutrition with sport in the future.” 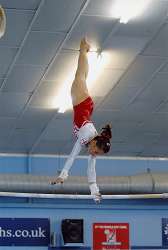