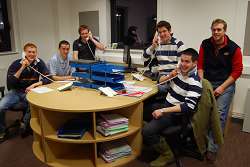 Around 30 students have been helping to raise funds to develop facilities at Harper Adams by participating in the University College’s first ‘telethon’.

The students, all scholarship recipients, kindly offered to donate their time to call former Harper students on the alumni database, in hope of donations.

The money is to be put towards three projects – the redevelopment of the engineering department, an extension of the current Student Union building, and a renovation of Ancellor Yard for educational purposes.

Or if preferred, the donor could choose for their support to be used for general donations or to be put towards student scholarships.

20-year-old Alastair Bourne from Ashbourne, Derby, received the Lord Stafford Scholarship recently and has been spending his evenings manning the phones with the other students.

He said: “I volunteered to do this because I wanted to give something back to Harper Adams in recognition of the support they have given me.

“It’s been relatively easy, as the people who I’ve been calling have been pleasant and it’s also been good practice, as eventually I’d like to own my own dealership.”

Stephen Mears, 19, from Radstock, recently received the Jerman Scholarship. He said: “The first call is always the most difficult, but you soon get into the swing of things.

“There have been some really lovely people, some of who have agreed to invest in the University College in the future, or offer placement years to students.”

Ros Barsely, Development Trust Trustee, member of the Harper Club committee and ex-Harper student, has helped to train the students. She said: “I’ve been extremely impressed by the professionalism and commitment that the students have shown, and the fact that they have raised some cash has made it even better.”

Prior to the telethon event, the annual appeal for donations took place, with alumni receiving a letter outlining the projects in need of support. This produced around 40 generous donations from ex-students. 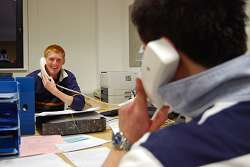