Evening of celebration for Irish students 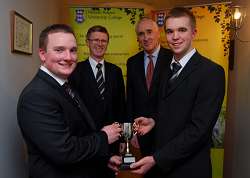 Harper Adams students from across the Island of Ireland united at a special celebratory evening on Friday.

The annual Harper Ireland dinner, organised by the student association of the same name, brought together past and present students, as well as special guests, for an Irish-themed 3-course meal at the Hadley Park Hotel in Telford.

It was also a chance for the out-going committee to hand over the reins of the club, and for guests to enjoy talks from a series of specially invited speakers.

Outgoing Chairman and host for the evening, Stephen McKean, formally welcomed guests and introduced the evening’s main speaker – Matt Dempsey, Editor of the Irish Farmers Journal. He said: “Matt was the guest speaker at the very first Harper Ireland dinner in 1997, and we are pleased to welcome him back.”

“The world is getting wider, for all of you, but it’s as well to reflect on whether you work in Britain or Ireland in your future career, as to what has happened to agriculture and farming and what kind of impact we have been making in the world.

“There’s a tremendous range of opportunity that is unfolding before all of you as you gain your education, in the most fortunate way, at an institution such as this.”

Mr Dempsey told guests that a colleague of his at the Irish Farmers Journal is a Harper Adams graduate, and that his knowledge of beef farming has contributed greatly to the publication.

He continued: “Don’t waste the opportunities given to you here, try and be alive to how the sector is developing outside of your speciality.

“Become specialists within your speciality, but keep a curiosity about the broader sector because there aren’t that many who can talk, argue, discuss and plan, with the basic background knowledge and understanding that you will bring to your roles as you leave here.”

Once Mr Dempsey had concluded his inspiring talk and wished the students luck in the future, Stephen handed over to incoming Chairman, 18-year-old Cormac Flaherty, saying: “I’d like to thank everyone who gave me the chance to be Harper Ireland Chairman.

“I’ve really enjoyed it, and always tried my best. I’m very confident that I’m passing over to the right man, Cormac is very capable and I’m certain that he’ll do a great job.”

Cormac, from Kilmessan, County Meath, said: “I would like to begin by thanking Secretary of the Harper Adams in Ireland past students association, Basil Bayne, because I don’t think we would really be here without him.

“Also, thanks for voting me here, I hope I can do as good of a job as you want me to and I hope that the Harper Ireland committee will be able to do something really special at the ball, and generally have fun throughout the year.”

The spotlight then returned to 19-year-old Stephen from Strabane, who announced the evening’s awards. These included the Victor Truesdale Award, President’s Award, Chairman’s Award, Dunbia Scholarship and Devenish Scholarship.

Special guest, Nevin Truesdale, was on hand to say a few words about Victor Truesdale Award recipient, Chris Megarry, 22, from Lisburn. He said: “Really the purpose of the award is to try and represent some of the qualities that Victor showed both in his professional and personal life.

“Growing up, as his son, I came across a lot of these things, such as integrity, and I can honestly say that I was never let down by him. That’s the kind of quality that we’re looking for when we’re presenting this award.

“Tonight’s winner is someone who has demonstrated all of those qualities. He’s climbed Kilimanjaro, he’s a rugby referee and has done a lot of relevant work and outside of his degree.”

The Truesdale award is kindly sponsored by John Thompson & Sons, with representative

Chris also received the President’s Award while Cormac was presented with the Chairman’s Award, Alexandra Massey, 20, from Errill, received the Dunbia Scholarship and Niamh Molloy, 19, from Maghera, the Devenish Scholarship.

The Finally, the evening concluded with a few words from Basil Bayne who said he was looking forward to welcoming students past and present to the Harper Adams in Ireland dinner, held next September. 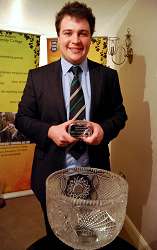 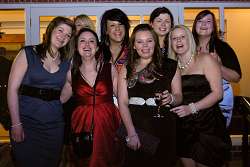