When I was introduced to Harper Adams, I was surprised and delighted at how the Off Road Vehicle Design course seemed to tick every box I could think of. 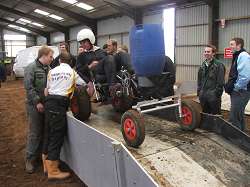 Even though final year student, James Croxford, isn’t from a farming background, he easily settled into life at Harper Adams and has enjoyed great success on his course, off road vehicle design.

24-year-old James, from Gnosall, Stafford, has recently returned from a placement year at Bentley Motors Ltd and received an Aspire Award in recognition of his success there.

He has stacked up an impressive set of results during his time at the University College, Shropshire, with an assessment average of 85% in the first year, and 84% in the second year. He is a McConnel scholar and was recently presented with the Harper Adams Club Highly Commended Award.

James, said: “I have thoroughly enjoyed my course at Harper with its balance of theoretical and practical elements, both of which I have been able to use during my placement year.

“I initially gained a place at Keble College, Oxford, to read Physics, however during my first year I found I was not happy with the purely theoretical nature of the course.  A prolonged illness finally convinced me to make the difficult decision to withdraw and I began looking for more applied engineering courses.

“When I was introduced to Harper Adams, I was surprised and delighted at how the Off Road Vehicle Design course seemed to tick every box I could think of.”

James’s enthusiasm for off road vehicles began during sixth form when he was involved in the Engineering Education Scheme and worked closely with GKN, Telford, on a project to design and manufacture a scale model of a seismic-mass isolated suspension durability test rig.

During his gap year he maintained his links with the Engineering Education Scheme and helped to run the Combined Cadet Force at Adams Grammar School, Newport, restoring a Series 2 Land Rover for use on military exercises and cadet training.

James, who has been nominated as course representative for the fourth year BEng and MEng students, added: “I have been awarded a place on the Bentley graduate scheme so will be returning to work there in October.

“I aim to continue my development so I can become chartered and hope to stay in the automotive industry in a testing and development role.

“My advice for young people looking for a career in engineering would be to make sure that you get some hands-on experience because that is what makes the difference when applying for jobs.

“Lots of courses are very theoretical and actually being able to 'do' engineering really makes you stand out.” 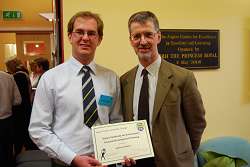