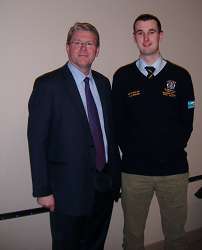 This week’s Harper Forum was an opportunity to hear from and question the President of the National Farmers Union, Peter Kendall.

It was also a chance for Harper students to raise their issues and concerns.

Mr Kendall began by outlining the role of the National Farmers Union (NFU) and said that public perception was a vital resource that was not being utilised.

He said the ‘old fashioned industry’ appeared to have little future, however, through better publicity this was improving.

He added that with farming featuring more prominently in government concerns, it showed that through the work of the NFU to secure the farm background in modern policy, its status was slowly improving.

Mr Kendall said that presentation of the agricultural industry was vital within up and coming legislative discussions to ensure that the government viewed the bigger picture to ‘think broader’.

For instance, the effects of losing tax exemptions on normal working farm families, reducing migrant workers on soft fruit farms, and planning restrictions on rural regeneration programmes – should all be highlighted.

As food security moves up the government’s agenda, he said it was vital to import less and produce more at home.

Therefore, the NFU is establishing bonds between the industry and the government.

He said they were there to present the industry’s good points and capabilities of the farmers to fulfil the policies and environmental factors, without derogatory legislation.

Showing this ‘professional view of the industry’ means greater power to it in debates, reforms and legislative upheavals, according to Mr Kendall

During questioning, Mr Kendall expanded on the need to remove ‘bad press’ from the industry’s profile and said that to make further progression it was important to keep the government onside and engage with it and the markets.

All of which stems from how they see the industry – ie the bad press needs to be reduced.

He added that people need to understand why farmers matter, why they need different rules and why they should help. So the industry must sell its self. This was a vital message of the talk and questions.

Next week The Forum welcomes a speaker from the Game and Wildlife Conservation Trust.