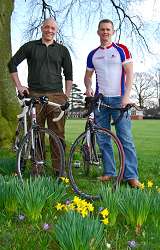 Two members of staff at Harper Adams University College are swapping their desk jobs for bikes and attempting a 200mile cycle ride for a cancer charity.

Richi Jenkin, senior IT support technician and Mitch Crook, crops lecturer, are joining forces with five members of the Market Drayton cycling club to attempt the challenge on April 1.

The group, also including David Howell, Bruce Heath and Ben Wylie, will cycle from London Bridge to Market Drayton via Cambridge in order to take in 100 miles a day.

The challenge is being carried out in memory of Johanna Gage, from North London, who sadly lost her battle with cancer aged 41, last October.

Johanna was Richi’s sister-in-law so he decided to take part in an event to raise funds for Marie Curie Cancer Charity.

Richi, from Market Drayton, who works at the Shropshire-based University College, said: “I am a member of the cycling club and we normally try and do something each year to raise money for a charity.

“This year I suggested Marie Curie in memory of my wife’s sister who lost her battle with cancer.

“We have been training since Christmas, cycling around 70 miles a week, but we have cycled 100miles in a day before which takes around eight hours.

“I want to thank everyone who taking part in the challenge and I hope we can raise as much as we can for this worthy charity.”

Anyone who wants to donate to the challenge and raise money for Marie Curie can do so by visiting www.justgiving.com/200milecycle