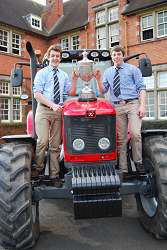 Agriculture students from Harper Adams University College were triumphant at this year’s Inter-University Ploughing Match at the weekend, bringing home the trophy for the first time.

The students travelled to Nafferton Farm in Newcastle-upon-Tyne to face their competitors, Reading and Newcastle, for two hours of match ploughing. Teams were judged on the straightness and sharpness of their furrows, alongside other factors.

20-year-old Tom Macfarlane from Royston, Hertfordshire, ploughed the opening furrow. He said: “It was a fantastic weekend had by all. The ploughing was spot on and so were the people.”

Rob Hirst, 19, from Ormesby, Great Yarmouth, said: “Because we won the trophy, Harper Adams will be hosting the competition next year alongside the agric block fixture.

“It was nice meeting other agrics from different universities and socialising.”

A group of fourth year students also travelled to Newcastle to support the Harper team and to help out.