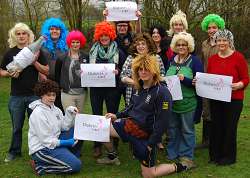 Students and staff at Harper Adams University College have raised more than £1,000 for the charity Diabetes UK by holding a ‘National Wig Day’.

Following ‘Mankini Appreciation Day’ last year to support Everyman Testicular Cancer Charity, the Students’ Union have persuaded as many staff and students as possible to wear a wig for the day last week.

Castle Capers in Newport supported the event by donating a percentage of all wig sales during the week to the charity.

Those taking part were invited to wear their wig all day whether attending lectures, meetings or participating in sporting activities.

A number of collection buckets were circulated around the Shropshire-based campus during the day raising a grand total of £1156, with more money still to come in.

Students’ Union President, Peter Dodd, said: “The students at Harper Adams try to come up with fun and innovative ways to raise money for charity, which get everyone involved and having a good time.

“We picked Diabetes UK to raise money on this occasion because a number of students and staff at Harper have recently been diagnosed with Diabetes.

“So far the Raise and Give team is on target for raising more than £20,000 through charitable events this year, which will smash last years total.”