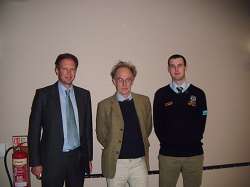 The Trust was originally founded as the Game Conservatory and for many years carried out the elements of research used in today’s Entry Level and Higher Level Stewardship (HLS) Schemes.

Mr Lindsay said studies began with a focus on the Grey Partridge which in 1995 became a Biodiversity Action Plan species.

This was because the number of breeding pairs had severally decreased, and people continued to shoot the species for recreation.

This decline reflected the increasing amount of pesticides used on arable land, which reduced the number of invertebrate - which are vital to chick feeding, said Mr Lindsay.

The Trust has contributed 70per cent of the current ELS guidelines for research carried out to help this species.

Mr Lindsay said there had been a huge effort into backing ELS, but in the UK the bird numbers were still declining suggesting the habitat only management was not working.

To improve these circumstances, he said a number of experiments had been carried out by the Trust and predator control was found to be the main issue.

The primary experiments were under taken on Salisbury Plain, and again in 2002 the Royston Project proved that habitat prescription alongside predator control of foxes and crows, with supplementary feeding, resulted in an increase of grey partridge pairs, the forum heard.

Mr Lindsay said these measures were deemed realistic and would be beneficial to the shoots. During these experiments an increase in songbird numbers and brown hare population were also noted.

Finally, he said, the Loddington Farm demonstrations showed that with this dual prescription an increase in wheat yield was not sacrificed for the birds.

In conclusion the speaker said he felt that the current method of top-down conservation was not working.

Mr Lindsay said there needed to be more bottom-up, farmer-led measures that were species driven and carried out at a landscape scale.