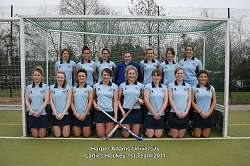 It has been a great term for clubs and societies at Harper Adams, with four sports 1st teams winning their leagues and a host of other great student successes.

The Mens Rugby 1sts, Mens Rugby 2nds, Womens Hockey 1sts and Womens Netball 1sts all won their British Universities and Colleges Sport (BUCS) leagues, competing against much larger universities from across the country.

Teams are made up of students from across all years at the University College, and play from October through to March.

The Mens Rugby 1sts played in the 1A BUCS league and were only one game away from being promoted to the premier league.

Sports and Societies Coordinator, Ben Harper, said: “This has been one of the best years we’ve ever had at Harper Adams for sport thanks to four of our 1st teams winning their leagues. We’ll be looking to build on this next season to try and maintain higher league positions.

“We’ve also progressed into the top 100 universities in the overall BUCS league, based on points, and this is the first time that this has ever happened.”

Earlier this year, the Harper polo team was crowned national champions at the Akuma National Arena Polo Championships in Clevedon.

20-year-old Polo Club Secretary, Pippa Humphrey, said: “It’s been a great experience competing against universities such as Oxford, Cambridge and Warwick and it shows the quality of riders that we have at Harper Adams.”

The 18-year-old said: “I fit my training around my lectures at Harper Adams and it works quite well.”

Also crowned BUCS champions, were members of the Harper Adams Clay Shooting Club. 40 students travelled to the West Midlands Shooting Ground at Hodnet to compete against the likes of the Royal Agricultural College, St Andrews, Oxford and Cambridge.

Mens team captain, James Wadland, 20, said: “Out of our top four, two of those were freshers – James Brown and James McManus, so that shows the quality that we consistently have coming through the club.

Rob Hirst, 19, from Ormesby, Great Yarmouth, said: “Because we won the trophy, Harper Adams will be hosting the competition next year alongside the agric block fixture.” 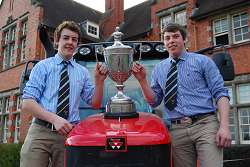