Energy chief up for national award

Getting the AD plant up and running has been the culmination of all the work that has gone before. This ... has the potential to take us far beyond carbon neutral: we expect to offset our emissions more than three times over.” 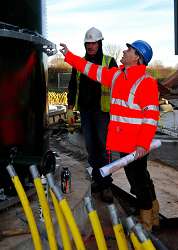 Paul Moran, Estates and Facilities Manager at Harper Adams University College, has reached the finals of The Energy Institute’s Environment and Energy Awards 2011.

He is among the final six people in the running for the Energy Manager of the Year award, sponsored by the Energy Services and Technology Association (ESTA). This award, now in its 12th year, acknowledges the achievements of energy managers who have used a range of methods to lower energy consumption in the work place and to educate staff to engage in these practices.

The shortlist, announced this week, places Paul, 39, alongside representatives of Marks & Spencer, Asda, The University of Leicester, Knauf Insulation and Schneider Electrics Ltd.

Paul has been Estates and Facilities Manager at Harper Adams, in Shropshire, since 2003. He has overseen an expansion of the total campus area by 40 per cent and driven the introduction of a range of energy saving and carbon reduction measures that have culminated this year with the building of a 500KW anaerobic digestion plant, which will convert food and farm waste into heat and power.

He said: “In my eight years here I have always aimed to develop a sustainable campus. Getting the AD plant up and running has been the culmination of all the work that has gone before. This is, by far, the biggest project, and has the potential to take us far beyond carbon neutral: we expect to offset our emissions more than three times over.”

Paul added: “Being shortlisted for this award means a great deal to me and to Harper Adams. While I, personally, am passionate about sustainability and have led these projects, this is recognition for a real team effort.

“Harper Adams might be a small institution, but it has huge potential for individuals to make a difference, and is big enough for those changes to be seen and to be worthwhile.”.

Paul was invited make presentations to a judging panel in London last month and he has already received a number of requests to present his work to organisations throughout the country as a result of his involvement in this process. More locally he recently presented to Newport Civic Society on Harper’s environmental work and the new AD plant.

The annual Environment and Energy Awards recognise and celebrate excellence, innovation and best practice within the energy industry and serve as a tribute to the winners' professionalism and commitment. The Energy Institute is responsible for judging six of the categories in which winners are announced and awards will be presented at the NEMEX Gala dinner, held during the Sustainability Live conference and exhibition in Birmingham, on May 24.