Shropshire farmers under the spotlight 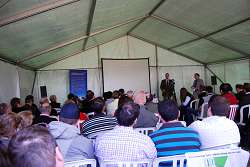 The crowds packed into the marquee and surrounding area when John Downes, from Longnor, Jeff Lester from Wem, and Bill Higgins from Pulverbatch gave talks on their farm operations.

Mr Downes runs a herd of 180 dairy cows along organic lines, focusing on innovative forage crops. His goal is to have intensive grassland production within his extensive system, to enable him to produce yields of 7,000 litres.

Mr Lester runs an 80-cow herd. He presented the producer’s perspective on robotic milking, and explained how to manage the cows to make sure the system works as it should.

And keeping a high performing herd on the straight and narrow was the focus of the talk by Mr Higgins, who runs 245 cows and tops the National Milk Records production league at 12,444kg/year.

Talks from dairy experts continued in the marquee throughout the day, and further presentations and demonstrations took place at stations around the dairy unit at Harper Adams, which was also filled with trade stands exhibiting the very latest in dairy technology.

Watch the video to see some highlights from the day. Note: Large file size.