Mr Harbour’s engineering background meant that he had a keen interest in the potential for developments in precision farming and in the application of technology to modern farming practice.” - Dr David Llewellyn 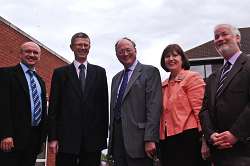 Business students at Harper Adams received a guest lecture from the chairman of the European Parliament’s Committee on the Internal Market and Consumer Protection.

Malcolm Harbour MEP visited the University College on Friday May 13, at the invitation of Senior Business Management and Marketing Lecturer Douglas Hill, who said: “Mr Harbour’s presentation and discussion about EU consumer protection was well-received by the students. The information gave the students a much better insight into the organisation and operations of the European Union, which will be beneficial in their career progression.”

Malcolm Harbour explained the role of the European Council, which represents all the member states of the EU, highlighting the way in which member states control the agenda of the EU. He explained the role of the Commission in initiating legislation and the ways in which directly elected Members of the European Parliament scrutinise the draft legislation and can amend or, ultimately, block the draft legislation.

He also emphasised that the role of the Internal Market and Consumer Protection Committee of the European Parliament, under his chairmanship, is to tackle the practical problems that might hinder a truly single market in Europe.

The seminar ended with Malcolm Harbour urging the students to seize opportunities for internships in Brussels which would undoubtedly enhance the already high employability of Harper Adams graduates.

“As a result, a number of the students expressed a wish to commence their careers by working in Brussels,” added Mr Hill.

After speaking to the students Mr Harbour was taken on a tour of the campus and farm by Harper Adams Principal Dr David Llewellyn, who said: “Mr Harbour’s engineering background meant that he had a keen interest in the potential for developments in precision farming and in the application of technology to modern farming practice.”

During the meeting, Mr Harbour agreed to promote agricultural engineering in the planned reform of EU research funding.

“It was also extremely helpful to have his perspective on research funding developments in the EU, which will be of help to us as we extend our research activities on food security,” added Dr Llewellyn. 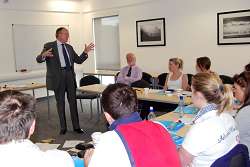