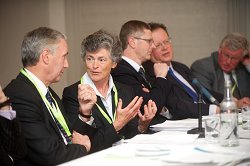 Earlier this week the Chairman of the Harper Adams Board of Governors, Alison Blackburn, and Principal, David Llewellyn, spoke to a packed audience at the Leadership Foundation for Higher Education/Committee of University Chairs Governance Summit in London.

The Summit was the culmination of a major research project in which 16 universities, including Harper Adams, had contributed as pilot institutions in testing  a new method to assess the effectiveness of governance arrangements in higher education.

The Chairman and Principal presented work on measuring boardroom dynamics and governance relationships which forms the core of the new assessment framework and represents a growing focus for determining the contribution made by governing bodies to their institution.

Earlier in the day delegates were given an update on higher education policy developments by the Minister for Universities and Science, David Willetts.  The Summit also heard perspectives on the key role of governing bodies from representatives of three UK higher education funding bodies. 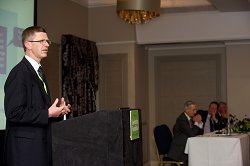