Harper Adams provided me with a very solid grounding and helped to steer me towards fresh produce, which best meets my interests and career aspirations." 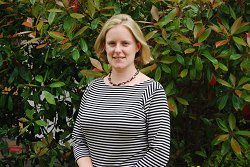 Harper Adams alumnus, Anna Goodall, has spent the past decade travelling around the world working in the fresh produce industry, and has found that speaking a second language has helped to kick-start her career.

Anna graduated from the University College in 2001 with a BSc (Hons) degree in International Agri-food Marketing and Production.

During her time at Harper, she spent a semester in Cordoba, Spain with the Erasmus programme which helped her to become fluent in Spanish, and then spent her placement year at Emmett’s Espana in Murcia and with a herb supplier near Malaga.

She said: “I really enjoyed my four years at Harper and made the most of every opportunity, as former Principal, Wynne Jones always used to say - ‘You get out what you put in’.

“Completing a placement year abroad with a UK veg and salads company gave me a valuable insight into the complexities and high demands of supplying the leading UK retailers with a continuously high quality product."

Anna believes that learning to speak Spanish has become one of her most useful assets, mainly because most of the countries that she works with speak the language.

She added: “ I studied A-Level Spanish at school and then continued at Harper Adams with lecturer Zorka Besevic, which kept up my conversational Spanish and added to my business vocabulary.

"Spending the semester in Cordoba was very tough as it was mostly theoretical and all lectures were very fast-paced! Even so, it was an excellent experience and I would recommend it to anyone.”

After graduation, Anna worked as a grape source technologist for American exporter, Legend Fruit Company. This involved spending three years sourcing grapes for Waitrose and Asda from California, Peru, Mexico and Chile, spending three months in each country during the grape harvest.

She then spent six months as a voluntary English teacher for an eco-tourism project on a coffee plantation in Nicaragua, Central America.

In 2005, Anna joined MMUK as Technical Manager for organic citrus and in 2007 travelled to Los Angeles, California. Here she spent three years setting up MMUSA and developed a supply base for citrus, grapes, topfruit and cherries to supply Fresh and Easy (Tesco’s US business) – which opened its first stores in 2007.

More recently, Anna joined Tesco as Technical Manager for grapes and bananas and has played a key role in the Group Food Sourcing division.

She added: “Fresh Produce is the perfect industry for me given that I have a passion for travelling and my career allows me to do that.

“I particularly enjoy meeting the people involved in the industry including grape pickers, irrigation managers, packhouse managers, buyers and ethical experts. Communicating in Spanish allows me to engage with growers and helps me to build long-term relationships.

“At the end of the day the aim is to create solutions not problems. Fresh produce can be very demanding and with long hours but there are many rewards and for me this includes the opportunity to travel around the world and meet wide range of people a very varied job.

“Harper Adams provided me with a very solid grounding and helped to steer me towards fresh produce, which best meets my interests and career aspirations.

“I truly believe that Harper Adams provides individuals with a well-rounded education and practical experience, which is vital as the job search becomes tougher.”