I really enjoyed connecting with so many former students who all seemed genuinely interested in what was going on at the college these days." 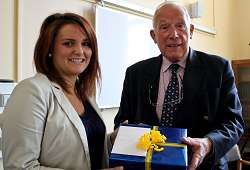 The Harper Adams Development Trust has given special thanks to student Tilly Lackie, 22, after she was identified as the star caller during a fund-raising telethon earlier this year.

Tilly, from Newchapel, Stoke-on-Trent, who is due to graduate this year with an honours degree in Rural Enterprise and Land Management, was one of 30 scholars from the University College who volunteered their time to contact Harper Adams alumni.

On receiving a gift from Trust Chairman Anthony Burgess, Tilly said: “It was a great experience; I really enjoyed connecting with so many former students who all seemed genuinely interested in what was going on at the college these days. Harper Adams has done so much for me that I would definitely want to donate to the Trust myself if I received a telephone call in the future. “

More than 80 scholarships worth more than £120,000 have been awarded in the past year through the development trust, all on a merit-basis, with students having to complete written applications and interviews to prove their worth to sponsors.

All 30 volunteers for the Telethon had received scholarships and wanted to give something back. They called 750 alumni over 11 days, to update them on current developments at the University College and raise awareness of the Trust’s fund-raising efforts.

Development Trust Consultant Renee Gallina-Morris said: “We are all extremely grateful to Tilly and the other scholars. They all seemed to enjoy the Telethon experience, and in return, they have had offers of guest speakers and work experience – one was even offered a job - and all have received a letter commending them for their efforts, which will be an asset to their CVs.”

The Telethon was supported by the Students' Union and Harper Club Committee.