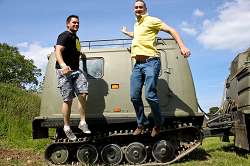 He said:  We’ve done so much this year, trying a few new big events. We had the huge Comedy in the Country gala, Katy B played here, so did Pendulum, and we had a paint party, and so much more!

“The highlight for me was definitely Comedy in the Country, featuring Jimmy Carr, Rufus Hound, Jack Whitehall, Russell Kane, Keith Farnan, Carl Donnelly and Four Poofs and a Piano. It was amazing to meet them all and from what I can gather, they all enjoyed themselves and we raised a lot of money for charity.”

The Students’ Union raised an estimated £20,000 during Pete’s year as President.

Pete, 24, from Teeside, is planning to enjoy a well-earned holiday, then he will be doing some contract work fixing agricultural machinery and harvesting over the summer, before moving into a more permanent position. He wants to work in either engineering, using Harper Adams BEng Agricultural Engineering, or event management – using all the skills he has developed as SU President.

He added: “I like to think I have learned a lot of leadership skills – and how to enjoy myself more. I’ve learned about event management. Being on the Board of Governors at Harper Adams has been a great privilege and I have really enjoyed learning about the ins and outs of Harper that most people don’t see.”

That is a privilege that will now be handed to Kevin Broe, also 24, who will graduate this summer with an honours degree in Agricultural Engineering, and is taking on the presidency from next week.

Kevin will be the third SU President from the Republic of Ireland in the University College’s 110-year history. He hails from Buttevant, County Cork and completed courses at Pallaskenry Agricultural College, Limerick, and Limerick Institute of Technology before commencing his studies at Harper Adams.

He said: “It was a bit of a shock to get the presidency, as I was a late candidate for the election. It was something I wanted to do, but I had already been offered a graduate position in the marketing department of Agco. I spoke to the company and explained that this would be a once in a lifetime experience and they very kindly agreed to hold the post for me.

“It’s going to be a steep slope, and a real challenge, but I am up for a challenge. I’m a ‘go get it’ kind of guy. There are a few things that need to be worked on at Harper, to my mind, and I have already started talks with the Governors, Principal and others.

“I also want to continue Pete’s good work. It would be great to make Comedy in the Country an annual event and raise more money.

What advice does Pete have for the incoming Student President: “Plenty! But mainly to enjoy himself and go at everything feet first!”

Harper Adams wishes both Pete and Kevin well in their in their new ventures.