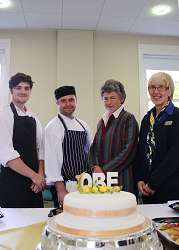 Governors and staff at Harper Adams University College enjoyed a celebratory lunch to mark the renewal of Investors in People status, the awarding of an OBE to Chairman of Governors Alison Blackburn and to say a fond farewell to outgoing student president Pete Dodd.

The University College had its IIP status renewed earlier this year, passing the standard with flying colours. Employees who had been interviewed in or otherwise assisted with the renewal process were treated to a Champagne thank-you lunch.

Chairman of the Harper Adams Board of Governors, Alison Blackburn, gave thanks to all the assembled staff members, then presented a gift to Pete Dodd, outgoing student president, to thank him for all the work he has done during his term in office. It was the last chance for Pete to see the Governors before he leaves the University College at the end of this week.

Then the tables were turned, and Mrs Blackburn became the focus of the celebrations, with Harper Adams Principal Dr David Llewellyn congratulating her on being awarded an OBE in the Queen's Birthday Honours. She was presented with a special cake, prepared by the Harper Adams chefs and cake-maker and decorator extraordinare Jenny David.

Alison Blackburn thanked them, and said Harper Adams could take a lot of the credit for her OBE, awarded for voluntary services to land-based Higher Education, as it was such a wonderful and supportive organisation to work with. 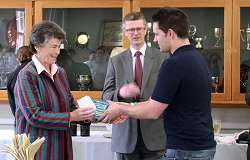