“I knew Chase and Status were headlining the ball so thought I would go for it and see if they would mind signing the work so that we could raise some money for Gethin’s nominated charity. 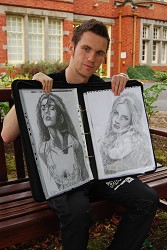 The pair, famous for hits such as ‘End Credits’ and ‘Time’ met Oli when they performed a DJ set at the Summer Ball last month.

18-year-old Oli asked if they would mind autographing a sketch that he had drawn of them, to be auctioned off for charity in memory of Gethin Webb, a student who recently passed away.

They were so impressed with the 18-year-old’s work that they requested their own copy of the sketch for promotional purposes.

Oli, from Shifnal, said: “I’ve been drawing since I was about three years old and work in pencil as I’m colour blind. It takes me around 16hrs over a week to complete a piece.

“I knew Chase and Status were headlining the ball so thought I would go for it and see if they would mind signing the work so that we could raise some money for Gethin’s nominated charity.”

Oli’s other work includes portraits of Megan Fox, Katy Perry and Robert Downey Junior, as well as family members and sketches of cars.

He is about to enter the second year of his extended foundation degree course at the University College in Shropshire where he hopes to be part of the ‘Freshers Crew’ – welcoming the next intake of students in September.

The former Idsall School student added: “I never really wanted to pursue a career in art, instead I chose countryside management at Harper because I thought it would be a good course for me.

“I love being outdoors doing practical work and so far, I have enjoyed the environmental science module the most. Plus, Harper is my local university and has a good reputation for teaching excellence.

“Being here also means I have a placement year in industry. I’m hoping to work as a Park Ranger at somewhere like Yellowstone National Park in America or one of the game reserves in South Africa.”

Oli is now preparing for his next projects – painting murals at a school in Stoke-on-Trent during the summer break, and illustrating children's books.