Our concept was designed to a specification that we believe will be commercially viable in 2030. 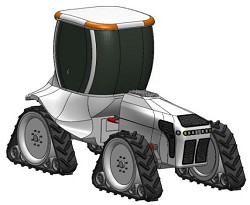 Ever imagined what tractors will be like in 20 years’ time? Students at Harper Adams University College believe they have the answer.

Five engineering students were asked to design what they believe will become the tractor of the future, as part of their final year group project assignment.

Through researching areas such as the future of farming, climate change, fuel sources and traction, they found that there will be an increased pressure on land use to generate food due to population growth.

Bearing this in mind, the team designed a concept which features wheels that can transform into tracks in the field to minimise compaction, uses hydrogen generated on the farm as a fuel source, has an Intelligent Implement System and autonomous mode, Track Washing System and finally a lift to aid entry into the machine.

22-year-old James Daniel from Launceston, Cornwall, said: “Through research, we found that a common trend amongst other designs was to increase the size and power of the machines, although this is likely to be unsustainable due to the constraints of current road networks.

“So our concept was designed to a specification that we believe will be commercially viable in 2030, which is to maximise the amount of useful work performed per kilo joule of energy consumed. This has resulted in a compact and light machine with high tractive ability.”

As well as James, the team consisted of Richard Canning, Ed Elliot, George Harris and Andrew Mason. 150 hours was allocated to completing the work, with one member nominated as group leader.

James, who has recently taken up the position of Technical Service Specialist at AGCO, added: “The project was challenging, but enjoyable, as tractors, agriculture and future technologies are areas of personal interest. I felt that we achieved our aim and delivered a tractor which will be a viable proposition by 2030.

Dr Ianto Guy, Head of Off Road Vehicle Design at Harper Adams, said “We devised this project as a way to get the students to think about the changes that would be made to the design of agricultural vehicles in their working lifetimes.

“We encouraged the students to choose emerging technologies that had already been physically demonstrated to some extent. The concept that they ultimately produced is both innovative and technically viable.”