“We’re extremely proud of Dan, he’s worked really hard at Herbert’s to apply the skills he learnt in his first two years at Harper Adams. 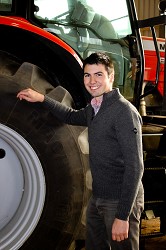 He was nominated for the Young Design Engineer of the Year category following a highly successful nine month placement with Herbert Engineering.

Dan, from Spalding, Lincolnshire, progressed from the shop floor up to the design office and worked on a variety of projects including a Vegetable Hydro-cooler, Submerged Even-flow Hopper and Wet Reception Hopper.

The 21-year-old, who is studying BEng (Hons) Agricultural Engineering, said: “I’m surprised but very proud that Herbert’s chose to nominate me for the award. It’s pleasing that they think so highly of me.

“Working for them has really helped me to focus my future plans and find out what it could potentially be like for me after university.

“I also found it incredibly rewarding seeing my designs being assembled in the factory and then used. It was a great hands-on experience.”

The awards aim to demonstrate and promote the quality of engineering design within the UK. There are 10 categories and results are announced at the Globe Theatre, London, on October 13.

“Dan’s story is a great example of how valuable the placement year, that all Harper Adams engineering students undertake, can be in preparing them for careers in the engineering industry.”

The Young Design Engineer of the Year award is sponsored by RS Components and there are four finalists including Dan. For more information visit http://www.beeas.co.uk/