My time at Harper Adams was very much an enjoyable one, I feel as though it helped me have the confidence, ability and personality to enter and succeed in such an award.” 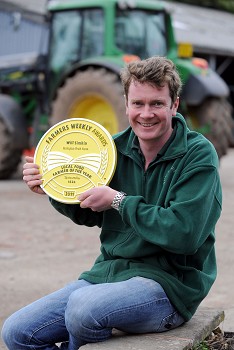 Two Harper Adams alumni have had their successes recognised in the annual Farmers Weekly Awards.

2004 graduate Will Simkin was named Local Food Farmer 2011. Will, 29, from Essington, Wolverhampton, was praised by the judges for his sound business plan, customer focussed growth and change, meticulous attention to detail in costings and margins, fostering a strong team spirit and relishing the challenge of keeping 3,500 customers a week happy.

Will completed a degree in Agriculture and Marketing at Harper Adams, and is clearly putting it to good use at his family’s Essington Fruit Farm and Shop, which sells 100 per cent of the farm’s produce, including 35 crops, Hereford beef and pork products.

He said: “I am thrilled to have won such a prestigious award, but the business is very much a team effort and many people have a part to play in our achievements.

“My time at Harper Adams was very much an enjoyable one, I feel as though it helped me have the confidence, ability and personality to enter and succeed in such an award.”

And Henry Barnes, part of the team that won the Diversification Award, was an agriculture access student at Harper Adams in the 2003/4 academic year. Henry, along with his parents, sister and fiancée, has helped to make Packington Moor Farm, in Staffordshire, a huge success.

The team runs an events business - including weddings on the farm - and café-cum-farm shop on their 282ha sheep and pick-your-own fruit farm.  Henry is taking a lead in the arable enterprise, while his fiancée Jo manages the wedding venue.

For full details of Will and Henry’s successes, and the rest of the Farmers Weekly Awards, click here.