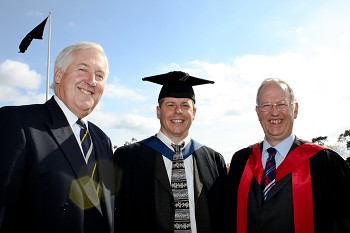 Kevin Pearcy has joined the agronomy elite by becoming the third person to achieve the BASIS/Harper Adams University College Graduate Diploma in Agronomy with Environmental Management.

The qualification is equivalent to the final year of an honours degree and leads on from the BASIS Diploma in Agronomy. An agronomist with Procam covering the South Essex and Hertfordshire area, Kevin actually passed his BASIS Certificate in Crop Protection back in 2001, followed by FACTS in 2002 and the BETA qualification in 2004. These and other qualifications were gained whilst he was a farm manager and sprayer operator. Three years ago when the farm was sold he joined Procam and in 2010 he achieved the Advanced BASIS qualification followed by the BASIS Diploma in 2011.

Kevin, who is justly proud of his achievement, explains: “Whilst I embarked on these qualifications because I wanted to do my own agronomy on the farm and for my own personal development, when I realised that with just a little more effort I could achieve the degree, it made sense to push for it.”

He is full of praise too for trainer James Christian-Ilett who he says did a fantastic job preparing him for the viva which forms a major part of the graduate diploma assessment along with a dissertation. “Having an all round knowledge of agronomy has got to be helpful to my customers,” he adds. “There’s a lot more to good agronomy than just getting the pesticide recommendations right.”

BASIS worked closely with Harper Adams to develop the qualification, as Managing Director Rob Simpson explains: “Whilst achieving ’your BASIS’ has been the gold standard for those involved in plant protection for the past 29 years, it has only been recently that all the BASIS qualifications have been recognised outside the industry. This has been through a process of accreditation with each BASIS course being awarded a number of credits at levels 5 and 6. Once this process was complete we realised that anyone who had successfully achieved the BASIS Diploma would, with just one extra 15 credit module, be at an honours degree level. With Harper Adams we now have that final step in place.”