“I think this award will be a great asset to the institution and think it will help to motivate all our staff to work to our potential.” 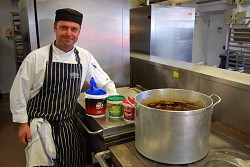 He has been shortlisted in the Best ‘Dinner Lady’/’Public Caterer’ category and is up against two other finalists.

The award is in recognition of ‘cooks who make mealtimes in our hospitals, care homes, schools or workplaces a delight’.

Wayne, who has worked at the University College in Shropshire since 2005, said: “When I was told that I had been nominated I felt honoured that the team and I have been recognised for all the hard work we have put in.

“I think this award will be a great asset to the institution and think it will help to motivate all our staff to work to our potential.”

The BBC Food & Farming Awards are now in their 12th year, celebrating the people and organisations behind the best of British food.

“Harper Adams is unique in its approach to source as much of its ingredients from the campus farm and surrounding area, and Wayne really drives this ethos within the department.”

A judging meeting will take place at the beginning of November with results announced at an awards ceremony at the NEC, Birmingham, on November 23.