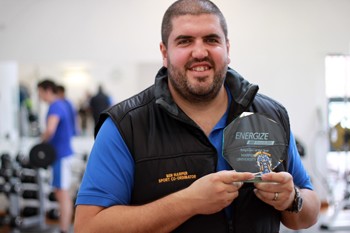 The 2011 awards event, organised by Energize Shropshire, Telford & Wrekin in association with the Shropshire Star, was held at the Greenhous Meadow, home of Shrewsbury Town Football Club and was attended by people, clubs and organisations from across the county and special guest speaker, cricket legend, Graham Gooch OBE.

Harper Adams was revealed as the winner of the “Employer of the Year” award. The audience heard about initiatives such as the Cycle to Work Scheme, staff-only fitness sessions, the success of the inaugural Harper Adams Five10 Run, healthy eating options, assistance with community sport and much more, which showed that the University College was committed to encouraging its employees to live active, healthy lifestyles.

Other award winners on the night were:

Sports Person of the Year – Richard Smith from Bridgnorth (Cycling)

Junior Team of the Year – Newport RUFC U14 Team

Innovative Community Project of the Year – I Can 2

Chris Child, Partnership Director for Energize STW said: “Congratulations to all of the people who won and were nominated for an Energize Award.  It is a pleasure to be able to recognise the people, clubs and organisations that are doing such good work in Shropshire and Telford & Wrekin.  Without people like them, and indeed all those for whom we received nominations, there would be fewer opportunities for people to start, stay and succeed in sport and physical activity.

“I would also like to thank everyone who nominated this year.  The standard of the nominees was exceptionally high and reducing the numbers down to three for each category was very difficult.  Although we can only acknowledge a small percentage of the people working or volunteering in sport and physical activity at the Energize Awards, we know that there are many people out there doing fantastic work. ”