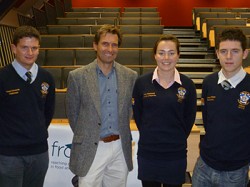 Peter Lundgren told the forum he grew up on a dairy farm in Sussex and now has his own arable and small outdoor pig farm in Lincolnshire.

He told the forum about the campaign against the Nocton dairy and how it was broken down into planning concerns and public concerns.

Planning concerns centred firstly around protecting the environment. There are fears about water pollution, with 170,000 people being dependant on the same water supply as Nocton; light pollution from the 24/7 working unit; increased traffic on small, country roads, and the creation of two concrete buildings. Then there are public health fears about the unit possibly causing respiratory problems for people in the houses close by; and there are also fears over how the unit would affect wildlife.

Mr Lundgren told the forum about his experiences of super-dairies in the USA, which were 8 miles from any dwellings; however in England, he said, there was not enough space to support and build a dairy so far away from any housing.

He then focused on the economic review of the campaign. Mr Lundgren told the forum that in the last 10 years retailers had become more dominant of the market share; with the processors maintaining their margin and passing the pressure back onto the dairy farmers. Retailer share has increased by 300% while the producers have only increased their chare by 30% (Dairy Co).

Mr Lundgren told the forum that super-dairies would have 1.5ppl lower costs, but was this enough?

He told the forum “Super dairy is a symptom of the problem and not a solution”. For a super dairy to be profitable it would need around 20,000 cows to meet world price, not 8,000.

There will be no forum next week but John Birchall (BBC farmer of the year) will be visiting the Forum on the 17th November to discuss HLS.