The Minister, Charles Hendry, said after presenting our award that he was pleased to see all of this happening in an education environment, instilling ‘green’ values in the next generation.” 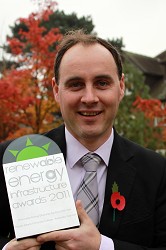 Harper Adams is celebrating winning one of the first ever Renewable Energy Infrastructure Awards.

Mr Moran said: “We were up against some stiff competition. It was a real honour to win one of these inaugural awards, because it shows we are, as ever, at the cutting edge of technology.

“The renewable energy sector is a real growth area, and there is lots of potential for investment and job creation. It is an emerging industry, so as the UK develops its renewable energy infrastructure, we are really pleased to be one of the early adopters of the latest green technologies: leading the way, getting the message out there and inspiring young people.

“All of this is only going to happen through young people – they are the next generation of leaders,” added Mr Moran, who was named Energy Manager of the Year 2011 at The Energy Institute’s Environment and Energy Awards in May. “The Minister, Charles Hendry, said after presenting our award that he was pleased to see all of this happening in an education environment, instilling ‘green’ values in the next generation.”

The Electricity Facility Award rewards all-round design and construction success, technical innovations, ability to communicate ideas across the delivery team and wider stakeholder group, plus the extent to which the project pushes beyond the norm in its design, delivery and operation.

The £3 million-plus Harper Adams anaerobic digestion unit was constructed thanks to funding from the Higher Education Funding Council for England’s Revolving Green Fund, project partner E.ON Energy, and BiogenGreenfinch, which supplied the plant.

Renewable electricity is produced from food and farm waste and provides a highly effective waste management system, which is anticipated to offset campus carbon emissions more than three times over. Other by-products of the AD process include liquid fertiliser and compost, which can be used in the University College’s farms and grounds operations, reducing reliance on manufactured fertilisers.

The AD plant has already attracted hundreds of visitors from the UK and overseas, keen to learn about green energy production. 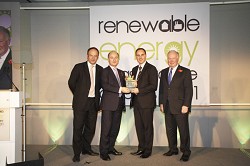