Rob’s one of the world's top engineers

“We want to awaken the younger generation's interest in agricultural technology and other agricultural issues and support the global importance of agriculture to the general public. 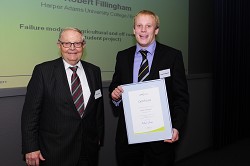 A Harper Adams student has been recognised as one of the world’s best young agricultural engineers.

Robert Fillingham, 22, was revealed as one of only nine international winners of Claas scholarships, presented during a ceremony at the agricultural machinery company’s customer service centre in Harsewinkel, Germany.

The “Helmut Claas Scholarships” were presented after each student made brief presentations to the Board of Trustees of the Claas Foundation, a panel of judges and many guests.

Board member Dr Hermann Garbers said: “We want to awaken the younger generation's interest in agricultural technology and other agricultural issues and support the global importance of agriculture to the general public."

The prizes were presented by Helmut Claas himself, the board chairman. Robert was awarded the third prize, of 3,000 euros, for his research into the cause of damage to equipment by a mini excavator.

Robert, from Watton, Driffield, said: “I submitted a report on ‘The failure modes of agricultural and off road machinery’ to the Claas foundation earlier this year.

“I was then asked to attend the award ceremony and visit to their headquarters, where I gave a presentation to trustees about my report and was awarded 3rd prize."

Robert was also awarded the Claas Scholarship for Agricultural Engineering in 2008. He received a bursary to assist his studies and completed various work placements with the company, including a 12 week placement in the UK and 15 month sandwich-placement in Germany.

He added: “I am very grateful to the Claas foundation for presenting me with this prestigious award which will help me to complete my MEng degree this year at Harper Adams, and continue my personal development.”

The first and second prizes went to students from the Universities of Stuttgart and Hohenheim. Fourth was a student from the Institute of Agricultural Machinery and Fluid Engineering at the Technical University of Braunschweig, and special bonus prizes were awarded to students from Germany, Russia and Ghana. 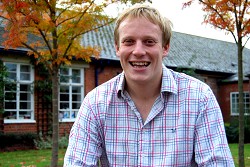 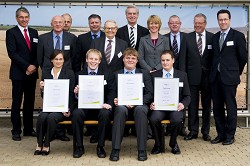