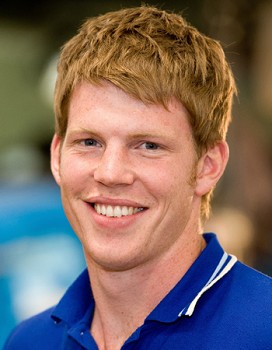 Sam, from Rhoshill, near Cardigan is battling to win the prestigious Fferm Ffactor 2011 title and take home the glittering prize, a 4x4 Isuzu Rodeo Denver.  He has had to tackle a series of challenges and impress two judges who know a thing or two about farming and countryside management – including Professor Wynne Jones, former Principal of the University College.

The three remaining competitors now need the audience’s help. Their task this week is to create an advert to promote agriculture in Wales which will be uploaded onto https://www.facebook.com/ffermffactor at the end of the programme  (9pm, November 23) and they need YOU to vote by clicking ‘like’ on your favourite advert.

Sam Carey graduated from Harper Adams in September with a BSc Agriculture degree, and was awarded the Royal Welsh Agricultural Society scholarship during his studies. He spent his placement year working for Waitrose and is a keen boxer, previously making it through to the Welsh Boxing Championships.