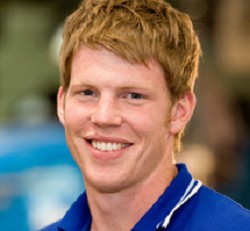 He was voted into the competition back in July and battled it through a host of farming-themed challenges to make it to the top three.

For one of the final tasks, Sam, from Rhoshill, near Cardigan, had to create an advert to promote agriculture in Wales. This was then uploaded to the Fferm Ffactor Facebook page for people to vote for their favourite.

Sam received the most votes, but lost out to dairy farmer Malcolm Davies from the Llyn Peninsula, who was crowned the 2011 winner. Malcolm was awarded the prize of a 4x4 Isuzu Rodeo Denver.

Judge and former University College Principal, Professor Wynne Jones, said: “Fferm Ffactor 2o11 has been the closest race since the series started in 2009. There was very little between them until the very end.”

Sam, 23, graduated from Harper Adams in September with a BSc Agriculture degree and was awarded the Royal Welsh Society scholarship during his studies.

He spent his placement year working for Waitrose and is a keen boxer, previously making it through to the Welsh Boxing Championships.

His family farm a 500-head pedigree herd and also have a small herd of beef.