All of the manufacturers said they were looking for engineers... So we came away optimistic about our futures, and about the course we are doing being valuable and worthwhile.” 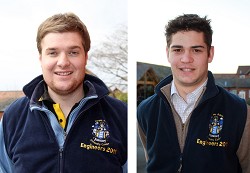 Harper Adams engineers have finished the autumn term in high spirits, after a trip to Agritechnica in Germany left them with a renewed passion for their subject, and great optimism for their future careers.

Two fourth year MEng Agricultural Engineering students, James Thomas and Kit Franklin, granted a wish for themselves and classmates by arranging the trip in November.

The pair worked out all the logistics and costings, before making bids to the Douglas Bomford Trust, Harper Adams Principal and the Harper Adams Development Trust to secure the £5,500 needed to take 30 students and two lecturers to Hanover for two days.

“We wanted to go both to learn and to make contacts within the industry”, explained Kit, 21, from Cirencester, Gloucestershire. “Agritechnica is the show where the most forefront technologies are released. It’s the place to be if you want to know about the latest developments in agricultural engineering.”

James, 22, from Devizes, Wiltshire, said: “We wanted to go over there and show them what Harper Adams is all about too: to sell ourselves and sell Harper Adams as a worthy employment base. We are very grateful to the Douglas Bomford Trust and the Development Trust who took the time to read our letters, to listen to our justification for going and for making it possible. Everyone who went said it was incredibly worthwhile”

One of the best things about the show was being able to see the technology they had been studying. “We’d just done an assignment about robotics in agriculture, and had to look at lots of case studies. We handed it in and a few days later, we were standing in these huge machinery halls, looking at the robots we had been writing about for real,” said Kit, Douglas Bomford Trust scholar and a former Vice Chairman of Cirencester Young Farmers. “Also, there was a big emphasis on electric power take-off, and on smart implements to improve efficiencies. Everything related to precision farming left us excited about the future in our sector and the difference it’s going to make on the ground."

James, a JCB scholar, added: “Another great thing was the positivity from industry. Kit and I spent the first day going round all the stands asking about job prospects, and 90 per cent of them said they wanted people. All of the manufacturers said they were looking for engineers, including big names such as Acgo, John Deere, JCB and more. So we came away optimistic about our futures, and about the course we are doing being valuable and worthwhile.”

Richard Green, engineering courses manager at Harper Adams, said: “I would like to thank and congratulate James Thomas and Kit Franklin on the success of the tour they organised to Agritechnica.  The behaviour of the students was exemplary throughout, making them both a credit to themselves and the College.

“At a time when there are concerns about graduate employment opportunities, it was reassuring to be told by numerous companies that they are seeking to employ Harper Adams Engineering graduates this year and to find our industry so optimistic about the future.  It was also very pleasing to observe the students’ enthusiasm and the professional attitude they exhibited as they conducted themselves about the show.”

The two students, who are clay shooting enthusiasts and have both shot for the Harper Adams team, are on the right path to become chartered engineers. As MEng students, they will complete dissertation research projects in the fifth year, and both plan to investigate some form of smart “precision farming” technology.

Despite both having an interest in farming, Kit and James are both very clear that their passion lies in engineering and technology. Kit’s family run a small arable farm and contracting business. While James comes from a military background, but became interested in farming thanks to work experience and Saturday/holiday jobs as a teenager. 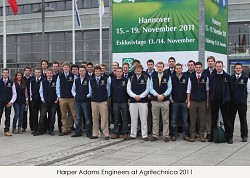 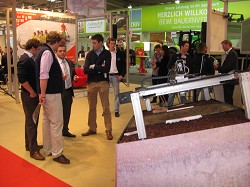