the accents are thick and the weather is cool, but there is nothing warmer than the hearts of the students and the faculty.” 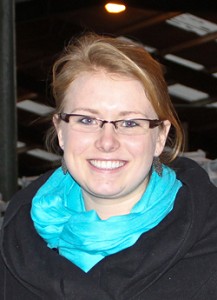 Harper Adams University College is delighted to welcome its first exchange student from Cornell University in the USA.

Betsey McKenna, 20, from Albion, New York, arrived at the Shropshire campus last week, to complete one term’s study at Harper Adams as part of her sophomore (second) year at Cornell University’s College of Agriculture and Life Sciences (CALS).

Betsey, who is studying Animal Science and Agricultural Science as her majors, with a minor in business, has settled in quickly at the University College.

She said: “Everybody has been so warm and welcoming. I’ve moved into one of the flats in the halls of residence and my flat mates have been great. We’ve already been to see War Horse and taken a midnight trip out for takeaway. As I said in my blog, the accents are thick and the weather is cool, but there is nothing warmer than the hearts of the students and the faculty.”

Betsey admits she has been very lucky with her head start in farming. Her father is a vet, and runs a family practice. The family also keep Guernsey cows and Betsey and her three sisters were each given one cow and one goat to start with, to rear as a life lesson.

“We get our first goat when we are five and our first cow at eight. Mum and dad fund the farm, [Wee Kin Farm, a nod to the family’s Irish roots] and we get to keep any profits.

“We were supposed to raise and sell our cows and put the money towards our college funds, but I haven’t sold mine. She’s a seventh generation cow from our farm and I’ve been very successful showing her – she’s currently the All-American Champion for her age.”

Working with the animals is something Betsey said she would miss while in England, but she hopes to get a chance to work on the Harper Adams dairy unit. That’s one of many to-do items on her list for her time in the UK, which also includes seeing rugby and cricket matches.

Study wise, Betsey is taking a series of Harper Adams agriculture, animal science and business modules that fit with her knowledge, experience and ambitions, which involve working in dairy nutrition in the first instance. “But I would like to get into agriculture politics and eventually become the US Secretary of Agriculture,” she explained.

Located in Ithaca, NY, CALS is uniquely situated as a publicly-funded college within a private Ivy League university. With 3,500 students and 360 academic staff, it is the second largest undergraduate college at Cornell. It is consistently ranked as one of the best colleges of agriculture and related sciences in the world.

The first students from Harper Adams to study in the USA will do so from August this year, with two students expected to attend each university. 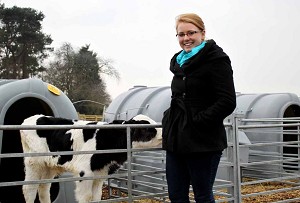