You can learn the theory for organising an event such as this, but to actually put it into practice has been superb, you couldn’t get a better educational experience. 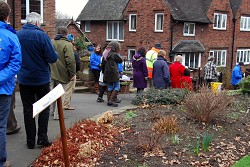 Charles Darwin’s garden was open to the public at the weekend, thanks to a special event organised by Harper Adams students.

Hundreds of visitors flocked to the evolutionist’s birthplace – The Mount in Shrewsbury, for guided walks and to taste Darwin-themed delicacies.

The event was organised by 16 final year students in conjunction with Shropshire Wildlife Trust and garden owners, Sharon and John Leach. It raised more than £1,100 for the charity through ticket sales and donations.

Project manager, 22-year-old Robert Smith, said: “This event has been organised as part of the ‘managing countryside projects’ course module.

“Working in groups we submitted proposals to the Shropshire Wildlife Trust explaining our plans should the open day go ahead.

“Lady Veronica Cossons chose a winner and then we all worked together to organise the event, which happened to also be on Darwin’s birthday.”

The students were involved with all aspects of running the event, which commenced the 2012 Darwin Festival, from site interpretation and health and safety to preparing leaflets and publicity.

Rob from Kingsbridge in Devon, added: “We weren’t quite sure of what to expect and it has been a lot of work, but it’s great to see that people have turned out.

“You can learn the theory for organising an event such as this, but to actually put it into practice has been superb, you couldn’t get a better educational experience.”

The tours lasted 30 minutes and explored the garden, Darwin’s ‘Thinking Path’ and old Ice House, how the gardens used to stand, the River Severn and the old eel-trap area.

The site will also be open on Friday, February 17 from 10am until noon. Contact Shropshire Wildlife Trust for details 01743 284280 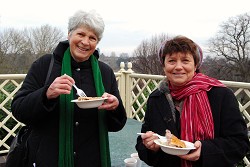 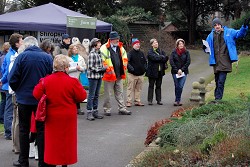