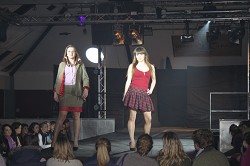 The event was organised by the Summer Ball committee, to raise funds for event at the end of June.

“We are hoping that the money can be spent on hiring acts for the VIP dinner or small bands to entertain on smaller stages,” said committee member Coral Russell

The models were from the student body and volunteered to showcase a wide variety of country clothing that was kindly donated by Timothy Foxx, Henry Hunt and Templeton Jones.

The money was raised by selling £3 tickets for the event, which included a glass of Champagne on arrival, and by holding a raffle with prizes donated by the sponsors, such as a Dubarry hipflask and a Timothy Foxx tweed handbag.

The committee would like to thank everyone who supported the event.