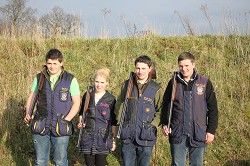 Both the ladies’ and the men’s teams went on to win their competitions, which saw each team member attempt to hit 100 various sporting clays over 10 stands. Those with the highest scores proceeded to compete in the final, with both Harper Adams teams claiming victory.

“The layout was challenging, with some of the stands incorporating the highest towers in the UK, however everyone shot to the best of their ability and we won the ladies’ and men’s high gun and team,” said Josie Nott, Harper Adams Shooting Club Social Secretary.

Amy Sharp took first place in the ladies’ competition with a score of 44/100.

“It was one of the more difficult layouts we’ve shot this year, and the Arctic conditions didn’t exactly help with my shooting!” added Men’s Captain Charlie Barnes.

The match in early February was against York, Nottingham, Newcastle and Edinburgh Universities.

The shooting team, which has attracted 90 new members at the start of the 2011/12 year, has three more competitions this academic year, and of course, they are aiming to win.